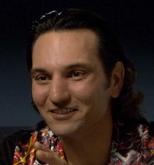 Production History:
2004/6: Jules Founder, CEO and President of “California Space and Technology News,” the first half-hour news program to deliver headline, breaking, and financial space, technology, and science news from California and around the world over the Internet in conjunction with California Space Authority, and received recognition from Governor A. Schwarzenegger for his pioneering vision.

2002 – NASA invites Jules to Washington, DC to consult on NASA programming and make recommendations on how to get the public more involved in America’s space future.

2000: He was invited by Walt Disney Attractions to serve as Executive Producer/Director of video production for the “Astronaut Hall of Fame Inducted,” where twenty-three of America’s space heroes were inducted into the hall of fame.

1997/2002: Jules Founder, CEO, President and Executive Producer for The Space Television Network (TSN), where he was responsible for the development of over forty original programs, the acquisition of 40,000 hours of space and technology stock footage, and 412 award-winning documentaries.  He was integral in the development of TSN’s Programming Board where he recruited luminaries Dr. Buzz Aldrin, Dr. Red Whittaker, and Dr. Robert Zubrin to name a few. Started working on Joules Space Technology