Jules Ross is an award winning physical comedian who been creating laughter for over 20 years. Best known for his performances on Venice Beach, California - Jules was featured in "Venice Beach Heart & Soul", a book highlighting 30 years of Venice Beach street performers where he is recognized for his talent and legendary status as a street performer. Jules combines his classical mime training/clowning with a lighting fast shadowing technique to produce a powerful physical comedy routine. His humor is reminiscent of Chaplin/Marceau and his style professional. 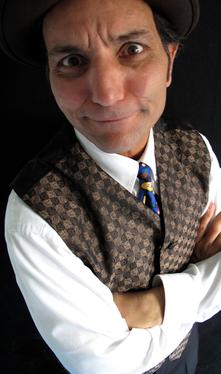 2008 - 09: Jules studies with Avner the Eccentric, and is featured in a book titled Venice Beach Heart & Soul 30 years of street performing on Venice Beach, CA.

2007: Jules was requested by Spielberg family to perform at the Chabad’s Children of Chernobyl, fundraiser in New York, City.

1996 - 1999: Jules produced two millennium parties: Palm Springs 2000/New Years Event for the city of Palm Springs and the Beverly Hills Millennium Block Party in collaboration with Merv Griffin Productions. He performed for the UCLA Women’s Gymnastics for two seasons. He performs for Robert Wagner and ‘Wings’ Celebrity Classic. In the same year, he appears in his first international magazine – “The Card.”

1992: Jules received critical acclaim from Master Marceau for his choreographic abilities.  Upon completion of his studies in Paris, he toured Europe and Canada and returned to the USA to continue his studies in movement and mime with Thomas Leadheart.

1988/91: While in Paris, Jules studied the technique of the master artist Etienne Decroux at the school of Corporal Mime directed by Steven Wasson and Corrin Soum.

1986/7: He studied with the master in Columbus, Ohio and at the World Center of Mime in Ann Arbor, Michigan. Jules received special attention for his outstanding talent and was invited by Mr. Marceau to continue his studies in Paris, France. He receives a letter of recommendation form the Mr. Marceau.

1984/5: Jules was invited to study with Master Marceau at the Goldston-Johnson School of Mime Kenyon College, Gambier, Ohio. He placed second in the National Yoplait Mime Search held in San Francisco, CA., Jules performance at Marine World Africa USA, in Vallejo, CA. and Riverside County National Date Festival, He trained with Leonard Pitts, in Berkley, CA, and performed at Fisherman’s Wharf, where he quietly became recognized for his comic talent. In the same year, he starts performing at Venice Beach and Third Street Promenade.

1982: He studied and toured for Richard Sheppard.